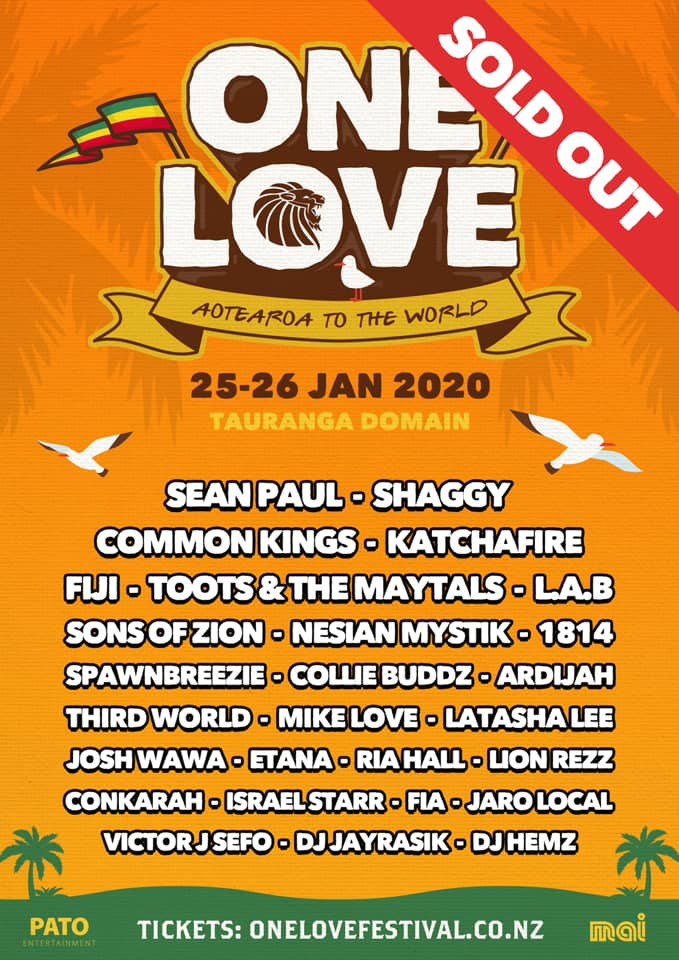 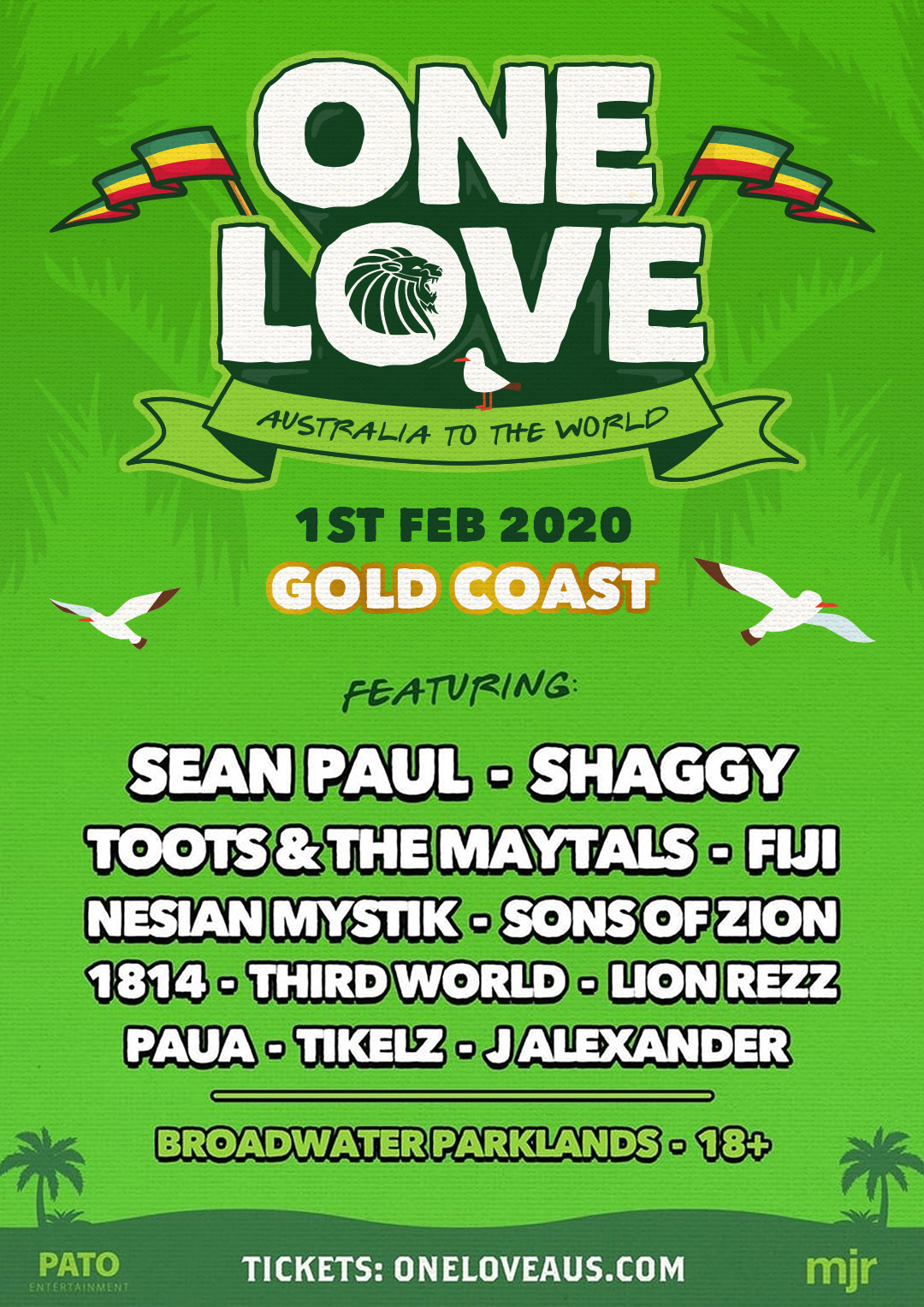 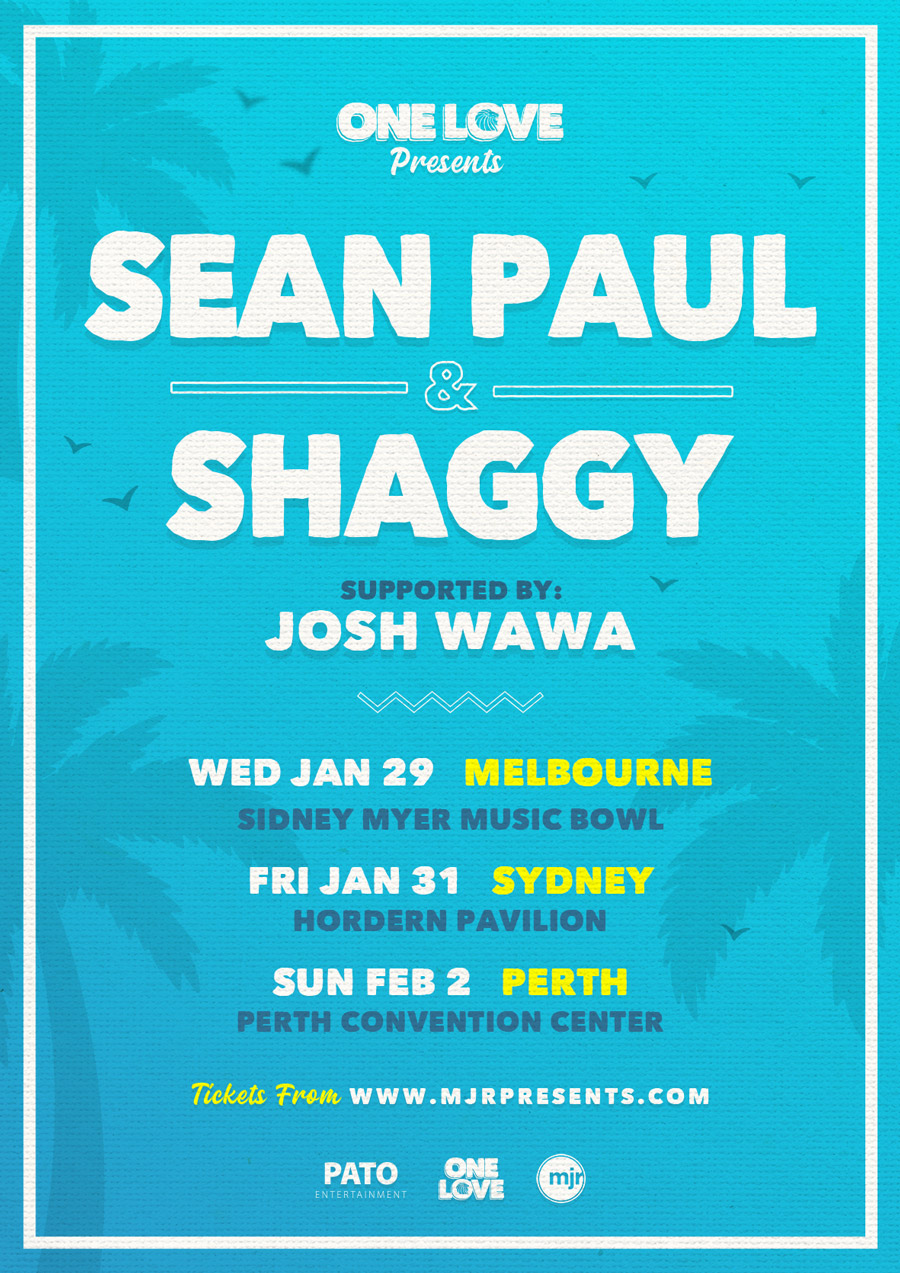 One Love Festival is New Zealand’s premiere celebration of Roots, Rock and Reggae

One of New Zealand’s most vibrant and popular summer festivals, ONE LOVE, has drawn around 80,000 Reggae fans over the past four years to the Bay of Plenty. The festival has sold out in advance over the past three years as it continues to grow in popularity year on year. Come from around the world for the two-day festival, which has earned a reputation the largest reggae Festival in the Southern Hemisphere. The festival delivers two days of good vibes and has hosted the best in international and national reggae acts such as Six60, Katchafire, Kolohe Kai, Steel Pulse, Big Mountain and more.

SIGN UP TO THE EXCLUSIVE PRE-SALE AND GET TICKETS BEFORE ANYONE ELSE – https://mailchi.mp/mjrpresents/oneloveaus

With the inaugural Australian-edition of ‘One Love Festival’ selling out three months in advance, headliners Sean Paul and Shaggy have announced that they’ll now be heading out on a national tour of Australia next February!

Supported by American, Reggae-pop star Josh Wawa White, the Jamaican dancehall legend Sean Paul and ‘Mr. Boombastic’ himself, Shaggy will be taking their tour around Australia, with arena-sized shows planned for Melbourne at the Sidney Myer Music Bowl, Sydney’s Hordern Pavilion and Perth’s Convention Centre, making it the duo’s largest Australian tour ever.

“Australia, it’s been far too long since I’ve had the chance to perform in your wonderful country” Said headlining act Sean Paul. “I was beyond excited to know that I was heading to the Gold Coast for One Love Festival. Knowing I now get to visit Sydney, Melbourne and Perth is the icing on the cake! Shaggy and me – we can’t wait to party with you all!”

Having both sold out their previous Australian tours, Shaggy – the dancehall/hip- hop/reggae artist behind such notable hits as ‘It Wasn’t Me’, ‘Boombastic’, ‘Luv Me, Luv Me’ and ‘Angel’ – and Sean Paul – the Jamaican rapper that reached global popularity with hits like ‘Temperature’, ‘Get Busy’ and ‘No Lie’ and hit collaborations with Beyonce, Simple Plan, Clean Bandit and Sia continue to prove the world’s obsession with international dancehall.

Don’t miss your chance to see two of the biggest names in reggae / dancehall on stage together for the first and possibly only time ever this February!